A downloadable game for Windows

Each player can fire Burst bullets or Balloon bullets. Burst bullets will reduce the enemy's health, and they'll drop gems when they're defeated. Balloon bullets will increase the enemy's size , firepower and defenses - as well as the number and value of the gems they drop when defeated. If you can time your shots properly, the enemy will drop even more valuable rainbow gems. But none of this matters if you can't collect them in time, or another player attempts to steal them. Try experimenting to see what else you can use Burst and Balloon bullets on, and compete for the high score.

Although the game allows you to play against computer-controlled opponents, it's recommended you play with a friend.

This build contains two short levels and two bonus challenges. The
Arcade mode plays through all four levels and allows 1 to 4
human/computer players; the Versus mode lets you choose a stage and
requires at least 2 players.

The Summer Jam build has no boss fights, music or sound effects. The updated SAGE build has a boss repeated twice, some older music, and placeholder sound effects. In both builds there aren't any resolution/sound adjustment options or CPU adjustment options. This build was developed and tested on a Windows 7 toaster with an XBox360 controller, and hasn't been tested on other Windows operating systems or with other joypads.

If you want to use a PS4 controller download the SAGE build and connect your controller natively; there is no need for plugins such as DS4.

Very fun, this has a lot of potential. The controls feel really fluid and the game is very bright and colourful so it looks and feels great. I was also impressed with the bonus stages they a nice touch, on the paint one a % would've been nice to see how close I got to total completion. Maybe even a specific bonus stage only mode to try and set high scores or some sort of WarioWare style minigame mashup could be interesting.

I didn't play 2 player but can you play the bonus stages in that too? Competing for more paint coverage like Splatoon and maybe a top vs bottom Pong style ball battle could be fun. Best of luck for development!

Thanks for the feedback. Versus mode lets you select a stage a play, choosing from the bonus stages as well as the arcade levels - both modes allow up to four players, human or computer.

The paint % idea is interesting and I'll implement that in the final game, I also want to come up with some other fun bonus stages that put all the players on an even playing field. If I do create further modes mixing up the stage layout, it'll be after the arcade and versus modes are finished and polished up (adding items and modifiers, cutscenes, etc).

Looking great so far! Especially love the character designs and overall art direction. I think enemy bullets should have a designated color though since the screen can get cluttered and they can be hard to see. But great job so far!I look forward to playing the finished game! :D

Thank you for the feedback. Enemy fire should always be clear to the player, so I will work on a new design for them (and the gems/player projectiles) to make them more distinctive. 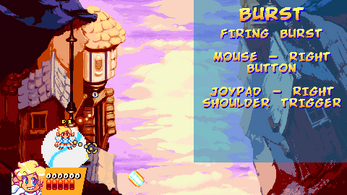 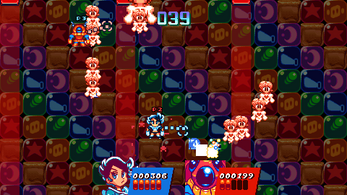 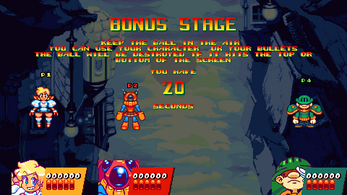